I was invited to give a talk at 404 Dublin, a really cool conference joining community groups w/ tech folks and art installations. When thinking of what topics might be of interest to the audience, I selfishly went to one of my (side) passions.. following artists who are doing amazing things with the intersection of computers and art.

So, what did I find when left to my own devices, Google, old art books and Twitter?

1. I found really awesome older than I imagined algorithmic art.

Did you know the first publicly shown algorithmic visual art was made on a graph printer called the Zuse Graphomat Z64? 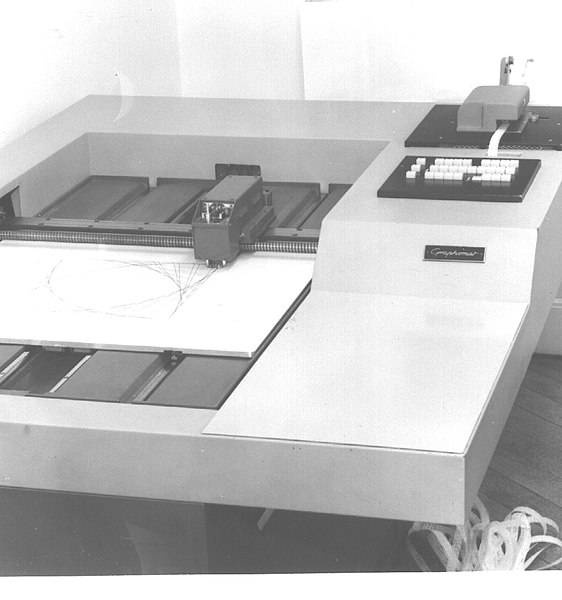 HOW COOL IS THAT? And it was written by a mathematician who studied philosophy under Max Bense at the (now) University of Stuttgart. Georg Nees (the artist) went on to create famous pieces now on display in galleries around the world, and his thesis on Algorithmic Art is massively hard to find and costs hundreds of Euros (yes, please send me a copy 😂). And yes, he is the one who described the art as "Künstliche Kunst" or "Artificial Art".[1]

And he wasn't the only one! Nanni Balestrini was writing algorithmic poetry using trained rules in 1961! Georg Nees presented alongside his fellow student Frieder Nake. And as you proceed into the 70s, you hit Harold Cohen creating AARON, a system designed to eventually create AI art. A system he spent 40 YEARS (yes!) working on. And Cybernetic Landscapes by Aaron Marcus. If you come across more interesting art in these early times, please post a comment or feel free to message me. I'm fascinated with early applications of "Cybernetics" and computers. 😀

2. I realized just how much neural network (inspired or created) art is pushing boundaries today.

I have been following the work of Gene Kogan, Mario Klingemann and Memo Atkin for the past year or so because they are amazing, inspiring and doing things I think will change the way we use deep learning in the coming years (I would argue they already are doing this). If you haven't seen their work yet...

After 7.5 epochs of training we are still in a dark place. pic.twitter.com/Bs9869YSc6

neural glitch: billions of computations to evoke the appearance of total disorder. and yet perfectly reproducible... a true dynamical system pic.twitter.com/3kZnBDLLci

But I also came across several artists and other persons in the field I hadn't heard of yet whose work I found really interesting, including:

There were more too, but those were some of my favorites. The more I looked, the more I realized I needed to visit galleries more. At least 3 of the artists I was inspired by had shown pieces in Berlin in the last year. Time to get off the computer and start experiencing art.

And I got to re-investigate some of the artists I feel like are making commentary on how AI and mainstream machine learning are affecting society, including:

3. It isn't very difficult to get started generating your own neural network art.

On my small laptop GPU, I was able to train several generative text networks using a series of LSTM networks or long-short-term-memory networks. The output usually just made me laugh as you need quite a lot of interesting data to make them work well.[2] I started with the usual suspects:

But there were even more interesting takes out there:

And of course plenty for visual art:

If you are looking for inspiration, you might want to start with these:

And there are so many more to play with. I'd love to hear about your favorites or feel free to share more artists (new and old) who are pushing the boundaries with neural networks and art in the comments.

Finally, if you want to peruse them, here are my slides:

I will post video if it's shared publicly. Special thanks to Vicky Lee for making my talk at 404 possible.

Unless you have been avoiding all news, you have likely heard of the coming changes in European privacy regulations which go into effect in May 2018. The changes are covered under the General Data Privacy Regulation Directive, whose final text was made available in

Finding ways to determine fake news from real news is a challenge most Natural Language Processing folks I meet and chat with want to solve. There is significant difficulty in doing this properly and without penalizing real news sources. I was discussing this problem